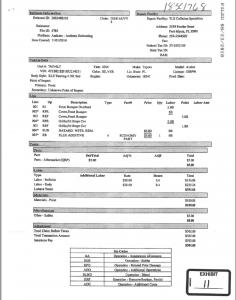 The ‘Zeal to Steal’. ‘Labor-heavy’ invoice pinned on renter to pay for new paint job (but where’s the repair for the ‘near invisible ding’ that implicated victim David Edward Howe???) 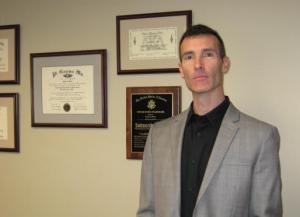 WHENEVER POSSIBLE, CHOOSE NOT TO RENT FROM ENTERPRISE, ALAMO, AND NATIONAL CAR RENTAL COMPANIES.”
— David Howe, Enterprise 'ding and dent' victim and survivor

FORT MYERS, FL, UNITED STATES OF AMERICA, September 13, 2018 /EINPresswire.com/ — Honorable Judge Archie B. Hayward Jr. (https://www.ca.cjis20.org/home/lee/leejudge.asp?Judge=hayward) hears remarkable testimony, including shocking admissions of failure to safeguard video booth evidence used to implicate the victim by Enterprise Management — as well as freighting ignorance by the same MANAGER regarding the otherwise common-sense knowledge of a duty (and perhaps legal requirement in the state of Florida) to protect and copy critical video evidence that is used against a renter. The video would have undoubtedly provided 'strong and substantial' proof of vehicle condition but instead of maintaining the video for the world to see, the company paraded rudimentary damage slips from prior customer contracts (these will soon be revealed to Congress so the lawmakers can see how vulnerable consumers are to these antiquated and highly-inadequate protocols that otherwise enable Enterprise to harm consumers with frequency and ease (just ask the FL AG what company and what industry lead consumer complaints annually in the Sunshine State; HINT: car rental industry). https://www.businesswire.com/news/home/20180813005692/en/IBM-Desperate-Plea-Enterprise-Holdings-Crime-Survivor

Listen to the admission that the manager, in fact, viewed the video surveillance — https://soundcloud.com/user-370781554/national-car-rental-damage-recovery-scam .

Not surprisingly to everyone victimized by a predatory 'ding and dent' encounter — Enterprise didn't keep the video and, of course, it was obviously never provided to police or the victim who each pursued it repeatedly to no avail: https://soundcloud.com/user-370781554/camera-request-mia-1078722-cr-2016-12-0921-18-37-6baa-1 . Yes, the manager admitted under cross-examination that he viewed the video but just didn't know he should not have taped over it. And I did say MANAGER to be precise!

How convenient for EHI that the tape was ERASED…unfortunately not so much for the TRUTH. But at least now the PUBLIC and the WORLD, we all have an admission UNDER-OATH and forever contained on a public record that EHI attorneys can never deny.

Indeed, it all certainly begs the question why EHI would want to suppress an exhaustive police investigation in a simple 'small claim' civil hearing — particularly since the same police report contained SWORN WITNESS TESTIMONY FROM THE VERY SAME WITNESS THAT TESTIFIED TO JUDGE HAYWARD AND THE PEOPLE OF LEE COUNTY AND THE WORLD?

Please, let's call it what it obviously is: SHAM DUE PROCESS IN A COURT OF LAW WHERE THE MERITS OF THE CASE ARE CONCEALED UNDER THE RULES OF CIVIL PROCEDURE AND FAR REMOVED FROM THE INFORMED EYES OF A JURY OF OUR PEERS.

And please, let's also call it what is obviously isn't: DUE PROCESS OF LAW AND JUSTICE FOR ALL.

But none should 'cry over spilled milk', because crime-fighter and crime-victim David Edward Howe — also known as the self-affirmed 'United States Credit Czar' and 'America's Child Identity Guardian for Babies for Girls and for Boys' — he accomplished the goal exactly intended and planned for nearly two years since the predatory incident in late 2016: A PERMANENT PUBLIC RECORD WITH A LITANY OF LIES THAT DIRECTLY CONTRADICT THE FACTS, THE TIMELINE, THE POLICE, THEIR OWN WITNESSES, AND SO MUCH MORE that will continue to make it's way to the public, the Congress, and law enforcement professionals across this nation and the world!

Yes, by every measure imaginable, it’s truly a disgrace of due process of law that predatory adhesion contracts can force consumers to take comprehensive and exhaustive evidence of criminal and civil injustice into a 'small claim' hearing against the 'will and desire' of the very subject of the injustice. And much worse, it was indeed a ‘small claim’ hearing where the PRO SE plaintiff expected that the merits of the case would trump the complex procedure that should be reserved for the regular civil docket. Is that such an unreasonable assumption? What is the point of small claim in the state of Florida anyway? https://www.einpresswire.com/article/461768476/florida-supreme-court-please-review-enterprise-attorney-citron-s-objection-to-conceal-police-report-in-small-claim-trial

So why did the EHI attorney object vigorously to moving the case to the regular docket? No doubt, the attorney was desperate to avoid a jury of peers hearing the facts.

Does anybody really wonder why?

Of course, the attorney was delighted to have such an unfair playing field. But we all know that’s exactly why Enterprise Holdings forces consumers who have been harmed so profoundly into a court where due process is far out of reach and far from the eyes and hears of a jury of our peers.

Why is the rental industry 'hell bent' on denying customers their 'due process'?

Is this how they continue to engage in predatory behavioer with ease and under the cover of law?

Yes, it’s an absolute shame that in the United States of America, our system of justice could be rigged in such an outrageous way. But that’s corporate America for us…and there’s likely not much ordinary consumers can do to change it.

Well, come to think of it, we can vote.

And we can even call for a boycott (yes, for the record, the PUBLIC BOYCOTT is on the way from victim Howe).

Thankfully though, there are states like California, as one example, that honor the small claims process by generally not allowing attorneys.

Now take notice of the invoice pictured above and recognize something very questionable: there’s no mention of repair of the pre-existing ‘ding’ that was the ENTIRE BASIS to implicate the innocent renter in the predatory scheme. And remember, UNDER-OATH the very manager who stated that he viewed the video and found ‘damages are not pre-existing’, HE DECIDED IT WASN’T IMPORTANT ENOUGH TO KEEP THE VIDEO AND PROVIDE IT TO LEE POLICE WHO MADE REPEATED CALLS THAT ENTERPRISE DIDN’T BOTHER TO RETURN. But he did tell the court that the 'ding' was certainly 'damage'. Unfortunately, Judge Archie B. Hayward Jr. he never confirmed the police effort to obtain information from Enterprise Miami because he sustained the attorney's objection that the report was 'hearsay'. Well perhaps it was in the context of a courtroom setting…but it really doesn't matter one iota to the facts — unless of course EHI wants to deny the reporting of the Lee Port Authority Officer who himself swore to uphold the law of the land!!

Don't believe it? Then read the trial transcript and prepare for shock and disbelief when you do (FACT: THE STATE OF FLORIDA HAS A VERY BROAD 'SUNSHINE LAW'). And if anyone does read it, then they may want to compare what EHI managers SWORE to regarding whether this was actually 'damage' versus 'wear and tear'

Yes indeed, to paraphrase the great Sir Walter Scott: 'Oh what a tangled web Enterprise Holdings weaved when it first set out to deceive.'

By the way — and of course on the public record in Judge Hayward’s courtroom — the manager said he had no idea that the police called to investigate this matter. EHI, they also had no idea that I called – repeatedly. That's really remarkable how so many employees and management can have no idea what is going on in their own company. Perhaps it's time for the federal government to do an exhaustive investigation on EHI business practices — and lack of.

Its' true. I do hope US Federal and State Attorney General Offices across this nation are paying attention to the incredible level of human incompetence, intentional negligence, and failure on display at Enterprise, Alamo, and National. The company has a habit of calling it 'human error'. I do believe they've coined the term. It's certainly the 'go to word' over the predatory car rental company. They've perfected and mastered 'human error' beyond belief!

And to be sure, they certainly have cornered 'human error' above all others because the neglect and outrageous handling of this rental scam is one for the books. Actually, it's now one for the records…namely the PUBLIC RECORD! Too bad for EHI and their employees.

Note from victim: If there are any lawmakers that are eager to meet and sift through the mountain of evidence and predatory behavior, please contact immediately Credit Czar David Edward Howe.

SISTER AND BROTHERS FROM THE UNITED STATES OF AMERICA AND FROM AROUND THE WORLD: BEWARE OF ENTERPRISE HOLDINGS AND ALAMO AND NATIONAL. DROP TO YOUR HAND AND KNEES AND TAKE PHOTOS OF EVERY SQUARE INCH BEFORE MOVING THE VEHICLE (https://www.businesswire.com/news/home/20180911005693/en). BE SURE TO PHOTOGRAPH UNDER-BUMPER COVERS, WHEEL WELLS, INNER-FENDER LINERS, INTERIOR…EVERY SQUARE INCH INSIDE AND OUTSIDE INCLUDING THE ENTIRE UNDER-CARRIAGE OF THE VEHICLE. WHEN AN AGENT TELLS YOU TO IGNORE 'ANYTHING SMALLER THAN A GOLF BALL' TELL THEM TO STAND ASIDE AND SNAP THOSE PHOTOS! IF THE AGENT CONTINUES TO RESIST OR CAUSE PROBLEMS REGARDING YOUR DESIRE TO DOCUMENT VEHICLE CONDITION, EITHER WALK-AWAY FROM THE RENTAL OR IMMEDIATELY CONTACT THE POLICE. I RECOMMEND THE LATTER. IT PROVED TO BE A BLESSING BEYOND IMAGINATION IN MY OWN PREDATORY ENCOUNTER. HATS OFF TO THE LEE PORT AUTHORITY POLICE AND THEIR THROUGH INVESTIGATION.

FINALLY, WHENEVER POSSIBLE, CHOOSE NOT TO RENT FROM ENTERPRISE, ALAMO, AND NATIONAL CAR RENTAL COMPANIES.