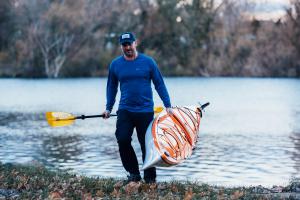 One man’s epic journey to reach people with depression.

Raising awareness for depression, Marc is attempting to solo Kayak Australia’s longest river. All 2450 kilometres. Unassisted and with no support crew.

Departing August 24th 2019, Marc Nieuwenhuys will be attempting to solo Kayak Australia’s longest river, (the Murray River) unassisted and with no support crew.

Raising awareness for depression & encouraging people to ‘start talking’, Marc will paddle 2400km’s through three states and over 37 towns. Over an estimated three months and more than 2.5 million paddle strokes, Marc hopes to inspire others to start talking about their depression.

Earlier this year Marc was kayaking a stretch of the Murray River when he realised it was time to change his life. After a long battle with depression the river resonated deeply with Marc and he made the decision to attempt the solo kayak journey. The expedition has given him the courage to stand up and talk openly and honestly about his battle with depression.

Talking about his mental health and sharing with others the details of his expedition, Marc soon realised that it was having a profound impact on others. His story was encouraging others to also start talking about their depression. One person has said “Marc’s story is giving permission for others to talk about their own mental health battle”. Marc’s expedition is now more than a journey for just himself, he wants to reach as many people as possible with the message that we need to start talking.

‘Talking About A Lonely Journey’ is the title to Marc’s up and coming book. It is also the title to his expedition. For Marc, depression has been a lonely journey, he writes a candid and emotional account of the daily battles one with depression faces. He will be writing and recording the physical and mental challenges he will face on this huge expedition.

A journey of this magnitude needs support and Marc’s story resonates deeply with many. Sponsors were quick to jump on board and include Kathmandu, Werner Paddles & Goal Zero. Local design company Formswell have taken care of all visual media whilst Rohan Thomson and Ashley St George from Pew Pew Studio Canberra have produced stunning images.

Attached is an introduction to Marc, details of his expedition and an excerpt from his book.

Marc lives in Canberra and is full time training and preparing for his upcoming expedition.
He is available for interviews and comments at the below contact details.

One man’s epic journey to reach people with depression.