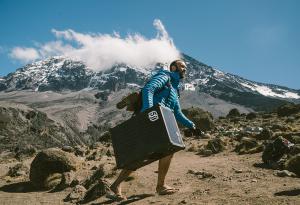 Trekking Kilimanjaro with Soundboks for Party at the Summit 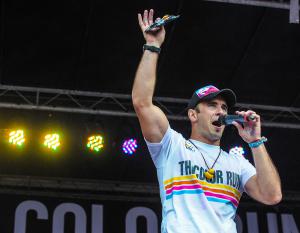 I live my life by three markers of success — the quality of the people you surround yourself with, how much you smile every day, and the experiences you have lived.”
— Max Rantz-McDonald

BORA BORA, TAHITI, FRENCH POLYNESIA, November 5, 2019 /EINPresswire.com/ — Following three full days of travel from Los Angeles, Max Rantz-McDonald has just landed in Tahiti, where he will hit the ground running to create and execute a series of promotional events for Soundboks, makers of the world’s first and only Bluetooth Performance Speaker. There will be boat parties, uninhabited island events, even large meditation events where crowds will hear the mega-speaker in action. Rantz-McDonald is a freelance event and video producer who travels the globe in search of adventure, and who creates and hosts events that are – themselves – adventures for those in attendance. Last year, Rantz-McDonald conceived, planned and carried out a dance party atop the 19,000-foot summit of Mount Kilimanjaro. That one was a party with a purpose and — working alongside the Last Night a DJ Saved My Life foundation — Rantz-McDonald’s Kilimanjaro dance party raised more than $70,000 for Feathers Tale Children’s Village, a home for special needs children in Tanzania and at the same time broke the world record for the highest altitude party.

A decade ago, Rantz-McDonald was playing professional rugby for the Irish Rugby Sevens team, when he heard the siren’s call to expand his life and satisfy his need for adventure. Starting out by doing what he already knew, Rantz-McDonald began organizing events for World Rugby and European Rugby Cup, but soon began producing and organizing other sporting events including Color Runs, and eventually took on music events, working on international tours for Bon Jovi, Eminem, Katy Perry and Queen. He has produced events for the Olympics and Red Bull, including Red Bull’s legendary Soapbox Race in Dublin. In 2017, Rantz-McDonald knew he must be doing something right when he was hired to create and facilitate the special VIP Experience for Oprah Winfrey’s Live Your Best Life multi-city arena tour of Australia and New Zealand.

“I wanted my life to be bigger, globally bigger,” Rantz-McDonald said. “I like doing something new and challenging every day, and I love connecting with people in parts of the world I haven’t seen before.” By combining his passion for creating unique events and producing adventure videos with his desire to visit every country in the world, he is more than halfway there. The United Nations currently recognizes 193 member countries, two UN observers (Holy See (Vatican) and Palestine), plus Taiwan and Kosovo, each of which are regarded as self-governed territories.

“I live my life by three markers of success,” Rantz-McDonald says, “the quality of the people you surround yourself with, how much you smile every day, and the experiences you have lived.”

For the half-French, half-Irish Rantz-McDonald, the more exotic the location, the better. When he is uncomfortable, he is happiest. For starters, he has had no fixed address and has not called one place home in more than 5 years, on the road all 365 days. He has organized curated small-group adventures to the Amazon, the Himalaya mountains and the Sahara desert. Each one of his trips is highly integrated with local communities and has a strong community give-back element.

Working with digital media creators/distributors Yes Theory, Rantz-McDonald has produced, organized and participated in some amazing adventures that are highlighted in popular Yes Theory videos. Rantz-McDonald was one of the adventurers who starred in the Yes Theory documentaries “Frozen Alive" (Frozen), viewed more than 6.2 million times, and “The Lost Pyramid” (Pyramid), viewed 1.9 million times, and he was one of the daredevils who agreed to sleep suspended hundreds of feet above the Grand Canyon in “Overnight on the World’s Most Dangerous Bed” (Dangerous Bed), viewed more than 1.9 times.

On Saturday, October 19, Rantz-McDonald emceed and produced Yes Theory’s first-ever Yes Live charity event to a sold-out audience in Los Angeles; the next morning he was headed to Tahiti, with a couple of stops – including one in Bali, because, well, why not? – along the way.

The Yacht Week – in the British Virgin Islands, Croatia, Thailand and Greece – which Thrillist calls “an exclusive seven-day, sailing flotilla for kind-of grownups that involves sailboats, exotic locales, and hard-partying young people from around the world.”

The Ski Week Canada – a journey through three ski resorts across 750 miles of Canadian open road winter beauty in a convoy of RVs for a week-long ski adventure.

Rantz-McDonald is a content creator as well, documenting both his professional and personal adventures, including his participation in the treacherous Gloucestershire Cheese Rolling Championship, his visit to Lesotho (Africa), one of the world’s least-visited countries, and the important local charity work he attempts to make a part of every adventure, such as rebuilding in Nepal following a devastating earthquake there. Max Rantz-McDonald YouTube Channel

Rantz-McDonald’s quest to visit every country in the world continues. He is someone you will want to keep an eye on as he curates experiential events and builds community all over the globe. And wherever you are, say hi when you see him, because that’s why he’ll be where he is – to meet and interact with people all over the world.

In the next two weeks, his work will take him across 7 different countries.