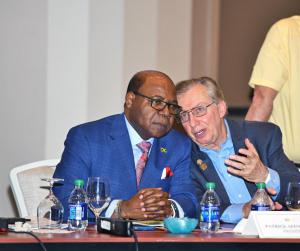 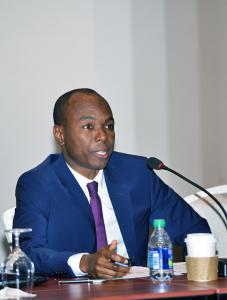 St. Lucia’s Tourism Minister Dominic Fedee, who also serves as the Chairman of the Caribbean Tourism Organization, was upbeat about the region.

NASSAU, THE BAHAMAS, February 20, 2020 /EINPresswire.com/ — Hotel growth last year continued to stimulate regional economies and augurs well for a strong 2020, according to reports and forecasts given at recent Caribbean Hotel and Tourism Association (CHTA) meetings.

Consensus, backed by data, was that the Caribbean on the whole continued its decade-long growth pattern, showing increases in stopover visitor arrivals, airlift, and key hotel performance indicators.

Adam Sacks, Founder and President of Tourism Economics, provided a keynote address at 'Pulse', showing a region which has rebounded robustly since the 2017 twin hurricanes which resulted in a large number of hotels being out of inventory in six of the region's more than 30 destinations. "The region's solid tourism performance was attributed to the continued strength of the U.S. travel market and growth in income, wealth, upwardly mobile demographics, and strong consumer confidence," asserted Sacks. He anticipated "continued, but slowing growth in 2020" but stated that even if temporarily volatile, "travel markets are staged for long run growth."

Sacks was optimistic about the industry's long-term outlook with projections of 27 million additional households coming on stream with an annual household income above US$100,000 by 2029 in 14 top source markets. "This represents an equivalent of a 34 percent increase in this lucrative, high-spending market," he added.

Visitor arrivals to the Caribbean continued to outpace growth in most areas of the world, according to St. Lucia's Tourism Minister Dominic Fedee, who is Chairman of CTO. While still awaiting reports from all of the region's destinations, data through September 2019 showed Caribbean tourism arrivals growing by 6.1 percent, outpacing the global average of 4 percent. He indicated that CTO anticipated 2019 would end with a 5 to 6 percent growth in arrivals.

Amanda Hite, President of STR, the industry's leading provider of hotel performance data, reported that the Caribbean had achieved a record year in 2019 in the key indicators for Revenue Per Available Room (RevPAR), up 2.8 percent, and Average Daily Rate (ADR), increasing by 5.6 percent. She indicated that 2019 saw the most supply ever and highest full-year supply growth. Supply growth had started to accelerate in 2014 after a period of flat/declining growth, hitting a high of 2.7 percent growth in 2017. But the hurricanes in September 2017 put an end to that; 2018 full-year supply growth was zero percent. The region's room supply increased by 2.8 percent in 2019.

Jamaica's Tourism Minister Edmund Bartlett, who also is Co-Chair of the Global Tourism Resilience and Crisis Management Centre, reported on the capacity of tourism to rebound quickly after experiencing a crisis situation and addressed some of the factors which help some destinations to rebound faster than others.

He emphasized the importance of the industry having strong readiness, response and public relations and communications plans in place which were well executed, thus making the difference in the length of time to recover.

His comments were reinforced by data provided by Mastercard senior executive John Mu ñoz, who showed how consumer spending patterns can be monitored and analyzed before and after a crisis situation, and how proactive measures can help to quickly restore spending patterns. Olivier Ponti, Vice President – Insights for ForwardKeys, which captures and analyzes airline performance data, showed how quickly The Bahamas has been able to rebound following Hurricane Dorian.

Brandon Meyers, Chief Revenue Officer for ADARA, pointed to the region's top 10 markets as well as the top 10 forecast for growth, while also describing the latest consumer search patterns when making travel decisions.

CHTA also released the results of its annual Caribbean Tourism Performance and Outlook survey. According to CHTA CEO and Director General Frank Comito, hoteliers were bullish on 2019, with 49 percent describing it as extremely strong or strong. More than 40 percent characterized it as a year of moderate growth, and only 10 percent considered the year to be weak.

Looking ahead to 2020, 48 percent of Caribbean hoteliers are positive about the year, with 20 percent indicating they are extremely positive. Thirty-five percent expressed a fair outlook, and 15 percent held a negative outlook.

Comito indicated that tourism continues to stimulate job creation, with nearly 49 percent of hoteliers reporting increased hiring while 35 percent reported maintaining existing levels of employment. Capital spending was up for the ninth consecutive year, with two-thirds reporting an increase over last year. "This augurs well for our tourism product. Significant improvements and upgrades continue to be made, while new hotels continue to open. The diversity, quality and number of accommodation offerings to travelers to the region are exceptional and continue to get better," stated Comito.

About the Caribbean Hotel and Tourism Association (CHTA)
The Caribbean Hotel and Tourism Association (CHTA) is the Caribbean's leading association representing the interests of national hotel and tourism associations. For more than 55 years, CHTA has been the backbone of the Caribbean hospitality industry. Working with some 1,000 hotel and allied members, and 33 National Hotel Associations, CHTA is shaping the Caribbean's future and helping members to grow their businesses. Whether helping to navigate critical issues in sales and marketing, sustainability, legislative issues, emerging technologies, climate change, data and intelligence or, looking for avenues and ideas to better market and manage businesses, CHTA is helping members on issues which matter most.