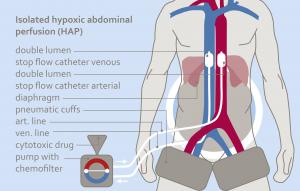 BURGHAUSEN, GERMANY, April 8, 2020 /EINPresswire.com/ — Ovarian tumours are among the most aggressive cancers in women and rank fifth in all gynaecological cancers. The disease is often only recognised very late and is then hardly controllable. Only about one third of the patients survive the five years after the initial diagnosis. If metastases have already formed in the abdomen, often only a radical removal of various organs and organ parts with subsequent chemotherapy is the only thing that can be done, which is accompanied by serious side effects and severely affects the quality of life. A current study at the oncological specialist hospital Medias-Klinikum in Burghausen shows that quality of life and survival time can be improved significantly with a special, regionally limited, highly concentrated chemotherapy.

Each year, about 9,600 women in Germany develop ovarian cancer, 5,500 of which die each year. Hence, this tumour is the main cause of death for all cancers in women. The main reason for the high mortality rate is that in about 70 percent of the cases the disease is only recognised in late stages, as it is largely symptom-free until then. Often, metastases have already formed in the peritoneum and in organs such as liver, pancreas or spleen. Survival prognosis is poor in these cases and often is only a few months, depending on the stage at the diagnosis. Furthermore, metastases in the peritoneum lead to large fluid accumulations in the abdomen, the ascites, which can be associated with severe pain. Standard therapy provides for the tumour to be removed as completely as possible with subsequent chemotherapy. Despite therapy, however, new tumours develop in almost half of the patients within two years that often cannot be operated on and show resistance to a repeated chemotherapy. "Such resistance can usually only be broken through by an extremely high concentration of chemotherapeutics", explains Prof. Dr. Karl Aigner, Medical Director of Medias-Klinikum in Burghausen, and adds: “However, this is not possible with chemotherapy, which is carried out via a venous access and the entire blood circulation as standard. The extremely high concentration would also massively damage the patient's healthy tissue.” This is exactly where a special treatment modality is available that was examined in a study at Medias-Klinikum in patients with inoperable and chemo-resistant tumours.

Local limitation of chemotherapy reduces side effects
The principle of isolated "Hypoxic Abdominal Perfusion Chemotherapy" (HAP) is a locally or regionally limited administration of highly concentrated chemotherapy with subsequent removal of the drugs from the blood in order to avoid toxicity. "In this way, we can achieve much higher concentrations of chemotherapeutics in the tumour and metastases than would be possible with systemic chemotherapy, and can overcome drug resistance in most cases," explains Prof. Aigner, who developed the method. For this purpose, the blood supply to the region affected by the tumour and metastases is briefly disconnected from the rest of the circulation and flooded with a high concentration of chemotherapeutic drugs. After an exposure time of about 15 minutes, the drugs are removed from the isolated region by means of a special filtration process and the entire blood circulation is restored thereafter. Because of the locoregional administration of chemotherapy with subsequent chemofiltration, patients experience only few to no side effects such as bone marrow suppression, reduced performance or hair loss.

Promising study results
At Medias-Klinikum, this treatment was performed in 45 patients with inoperable, chemo-resistant tumours of the ovaries in late stages, metastases in the peritoneum and in various organs, as well as distinctive ascites. All patients had previously undergone several standard therapies in other hospitals. On the basis the tumour marker CA 12-5, it could be shown that more than 70 percent of the tumours responded well to the therapy. In more than 70 percent of patients, the partly massive accumulation of fluid in the abdomen (ascites) disappeared or could be significantly reduced already after two regional chemotherapies. Median survival time across all tumour stages, which was just below 12 months, was about twice as high as in other studies. All patients were asked about various quality of life parameters such as diarrhoea and nausea, hair loss, tiredness and fatigue, etc., which are common among patients treated with systemic chemotherapy. It turned out that regionally administered chemotherapy with subsequent filtration is clearly superior to standard therapy. "Overall, these study results are promising and make it clear that HAP is at least a therapeutic option for patients in late tumour stages," Prof. Aigner comments the study and adds: "We have patients who have been symptom-free for more than 13 years after treatment and are without evidence of tumour."