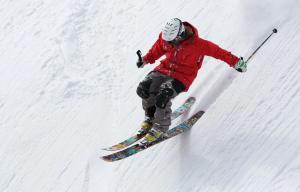 NASSAU COUNTY, NEW YORK, UNITED STATES, September 14, 2020 /EINPresswire.com/ — Skiing is usually considered a winter sport, but if you‚Äôre able to travel or you live in a mountainous area, it can be a fantastic all-year sport to get involved in. There are many kinds of skiing, from cross-country to downhill racing, competitive to recreational. But no matter what kind of skiing you pick up, there is a bevy of benefits, both physical and psychological that can be attained through skiing.

‚ÄúThis may feel obvious to most people because skiing is a physical activity,‚Äù says Micah Raskin. ‚ÄúBut I don‚Äôt think in general that people understand exactly how much work skiing is. Because it looks like you‚Äôre gliding downhill, people assume it‚Äôs more about balance than cardio and strength. But nothing could be further from the truth.‚Äù

Micah Raskin goes on to explain that the Harvard Medical School performed an efficiency and efficacy study on skiing. The ultimate number of calories that you lose skiing will vary based on your weight and your fitness level and your proficiency in the sport. But, in general, someone who weighs 185 pounds can burn up to 266 calories in just thirty (30) minutes of downhill skiing!
If you‚Äôre trying to burn even more calories, Micah Raskin suggests walking up the slope instead of using the ski lift. ‚ÄúThat will get the blood pumping!‚Äù he laughs.

Skiing Is a Great Mood Booster According to Micah Raskin

Exercising creates a rush of feel-good chemicals known as endorphins that are released into our bloodstream. This makes us feel happy and relaxed. Being outdoors has a similar effect. Studies have shown that being outside calms the nervous system, lowers blood pressure, and lowers the heart rate – all of which can help combat the impact of stress on our physical and mental health. Since skiing is both fantastic exercise and performed outdoors, it‚Äôs a double whammy of feel-good endorphins and a calming nature experience.

‚ÄúWhen I‚Äôm skiing, it‚Äôs like everything else fades away,‚Äù says Micah Raskin. ‚ÄúIt‚Äôs just the wind on my face, and the feel of my body, and the sparkle of the snow.‚Äù This kind of mindfulness pulls you out of your everyday worries and calms your mind, which gives your nervous system a much-needed rest.