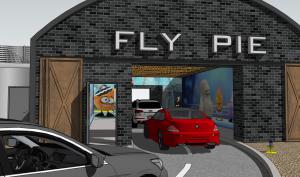 Fly Pie to open in Henderson, NV this spring. 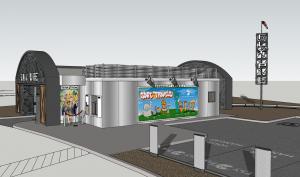 Fly Pie is the restaurant of tomorrow in today’s world where quality of food, entertainment value, and speed of service is the name of the game for our customers.”
— Anthony E. Zuiker

Just one year ago, a chance meeting between Zuiker and Godino at B.A.R. (Born And Raised) in Henderson, set in motion the idea for Fly Pie, after Zuiker, a Las Vegas native, had just experienced the unexpected death of his mother. Connecting over life, loss, and dreams, the two discovered they had both long entertained remarkably similar visions for the ultimate family gathering spot. From that moment on, they formalized the partnership and raised nearly $2M in private investment to bring the franchise to life.

Fly Pie takes guests on a first-of-its-kind flight-themed food and entertainment drive thru experience where upon pulling up to Fly Pie, they will be guided towards “take off” by reflective tape, windsocks, and flight-themed uniformed employees who assist with ordering. Customers will then be treated to an immersive entertainment experience as they drive towards the pick-up window, featuring original characters, created by Zuiker, and brought to life by Tremblay Bros. Studios (Looney Tunes, Felix the Cat). Through the adventures of “Lil Churro Tot,” “Mr. Heat,” “Chomp,” and their friends, guests of all ages will enjoy the fun and inspiring stories, and if that’s not enough to tempt guest’s taste buds, the immersive experience is also heightened by scents such as pizza, cinnamon, and bacon, inspired by the characters and menu items, that fill the air in the drive-thru tunnel.

Also key to the Fly Pie experience is the food. Tapping into Godino’s success in the Las Vegas restaurant scene, Fly Pie’s menu feels like a gastropub, serving up high-quality “culinary cuisine” such as artisan pizza, wings, loaded fries, and made to order desserts like fried Oreos and churros. Fly Pie will have a state-of-the-art, modular cubed kitchen, created by Extreme Cubes, that is fabricated off-site and then brought in as one piece of equipment. It includes a high-octane oven which cooks perfect pizzas in less than three minutes. The pizza features an original dough recipe, with New York water, to produce the superior taste and quality appreciated by true pizza connoisseurs.

“Our number one priority at B.A.R (Born and Raised) is the food, and our establishment has won 'Best Bar Food' and 'Best Chicken Wings' in the Las Vegas Review Journal 'Best Of…' categories for many years. Now, we are taking our high quality gastro-tavern food and combining it with artisan gourmet pizzas on the fly,” said Godino. “At Fly Pie, we are 'culinary casual.' A whole new category of upscale cuisine from Dr. Pepper signature wings to Deep Fried 'Double Stuff Oreos.' It will be a quality experience people wouldn't expect from a drive-through. We want guests to walk away thinking this was some of the best pizza we’ve ever had.”

Under the simple abiding credo, “Fly Pie is for everyone,” Fly Pie aspires to innovate as a true and beneficial neighbor of every community from creating a safe space for all to meet to championing diversity in its “flight personnel,” with crew members proudly displaying patches denoting their fields of service expertise. Further tapping into the local community it serves, Fly Pie will feature an “Art Wall” where local graffiti artists paint something new every three months as a way to bring the community together through positive events. Fly Pie will also feature its own TikTok and Character Walls, complete with multiple backgrounds, where hungry patrons can take selfies with the Fly Pie characters and post on social channels, becoming instant ambassadors.

“Fly Pie is the restaurant of tomorrow in today’s world where quality of food, entertainment value, and speed of service is the name of the game for our customers,” said Zuiker. “In terms of our employees, we are all about diversity and empowerment. This is key to high morale and long term success as we look to the future of QSR.”

Fly Pie is QSR reimagined for these times with carry out and contactless delivery as well, where orders can be placed through the Fly Pie app and planned third-party delivery partners such as Uber Eats, GrubHub, DoorDash and more.

The first Fly Pie location is set to launch in the spring of 2021 in Henderson, Nevada, near the world-famous Las Vegas Strip, on the high-traffic corner of St. Rose and Coronado Center.

Anthony E. Zuiker is the creator of the phenomenally successful "CSI" franchise, which has earned the title of the "most-watched show in the world" on multiple occasions, spawned three television spin-offs ("CSI: Cyber," "CSI: Miami" and "CSI: New York"), aired hundreds of episodes, and even garnered a Guinness World Record. As one of the most groundbreaking storytellers today, Anthony continues to innovate across every platform from TV to digital to books and Broadway. In addition to helming his own publishing company, Zuiker Press, with wife Michelle, Anthony is also executive producing “Soul Train” the musical for Broadway.

Scott Godino Jr. comes from a long history of successful businessmen. His grandfather, Andrew Zorne, was the former president of the Mint, Hacienda, and Park Place. Another influential family member is Lou Godino, who owned and operated the highly-touted Town Lounge in Rockford, Illinois. Godino Jr. would blaze his own trail in Las Vegas by creating, owning, and operating “B.A.R. – Born and Raised.”