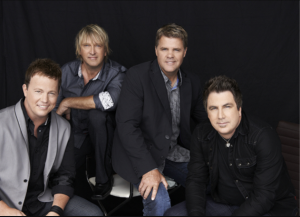 Lonestar will bring its rich melodies and vocals to Milford's Veterans Memorial Auditorium on September 2, 2021. Tickets are on sale now at MilfordVMA.com

Lonestar has been thrilling audiences for more than two decades. With both fans and artists excited to get back to shows after a long break, we’re certain this will be a memorable night.”
— Baker Concerts

MILFORD, CONNECTICUT, UNITED STATES, January 14, 2021 /EINPresswire.com/ — Country music legends Lonestar are bringing their rich melodies and strong vocals to Connecticut in the fall of 2021. The best-selling artists are getting back on the road in 2021 and will be performing at Veterans Memorial Auditorium in Milford, Connecticut on Thursday, September 2nd. Tickets are on sale now at MilfordVMA.com.

Lonestar, which features Richie McDonald (lead vocals), Michael Britt (guitar & vocals), Keech Rainwater (drums) and Dean Sams (keyboards & vocals), has amassed RIAA-certified sales of more than ten million albums since coming together in 1995. In the ensuing 25 years, the group has racked up a string of ten No. 1 country hits, including “No News,” “Come Crying To Me” and the crossover smash “Amazed” – which became the first record since 1983 to hit the top of both the country charts and Billboard’s Hot 100.

Performing more than 100 dates worldwide, Lonestar has been honored with numerous awards and accolades. “Amazing” captured the ACM’s Single of the Year and Song of the Year awards, with the band earning the CMA Vocal Group of the Year honors as well. In 2017, the group was honored with a People’s Choice Award nomination for best country group.

“Lonestar has been thrilling audiences for more than two decades, and we’re honored to be able to bring them to this intimate venue,” says a Baker Concerts spokesperson. “With both fans and artists excited to get back to shows after a long break, we’re certain this will be a memorable night.”

Brought to you by Baker Concerts, tickets are available now at MilfordVMA.com, with prices beginning as low as $45 and premium seats at the edge of the stage available for $85. Organizers are confident that the performance will run as planned with full capacity as concerts return from their long hiatus due to the coronavirus. Should a cancellation be necessary, full refunds would be granted.

Veterans Memorial Auditorium is an intimate venue at 70 West River Street, Milford, Connecticut with a capacity of 962 assigned seats. Originally part of the Milford High School, the auditorium has undergone a face-lift to become part of the Parsons Government Center and the home of performing arts in the city.

Doors for Lonestar on September 2, 2021 at Milford’s Veterans Memorial Auditorium open at 6:15 p.m. The band is expected to take the stage at approximately 7 p.m. Tickets can be purchased now at https://www.MilfordVMA.com.