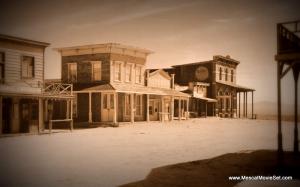 The Streets of Mescal 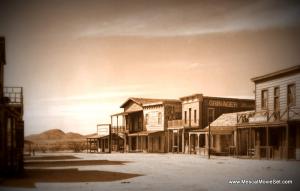 Film Set for the Movie Tombstone 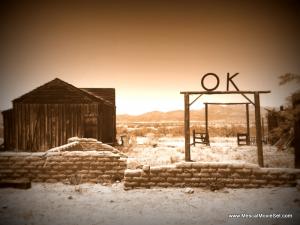 We are reaching out to all those who love our western heritage to please help preserve and rebuild the Mescal Movie Set.

MESCAL, ARIZONA, USA, May 14, 2021 /EINPresswire.com/ — The Mescal Movie Set is one of the most recognizable western cinematic towns on the big screen. The iconic set was home to the movie Tombstone, The Quick and the Dead, and over 80 other westerns. Notable actors walked the dusty boardwalks, including Steve McQueen, Paul Newman, Lee Marvin, and Clint Eastwood. Sadly, the years of use and weather led to the set's deterioration and ghost town appearance. The "Old Gal's" destruction was looming, and in short order, bulldozers would soon level her to the ground, and she would fade into the dust of the desert.

But, local ranchers wouldn't let this essential piece of western history and Americana be lost. They stepped in and acquired the rights in February and started plans to rebuild the set and return it to its former glory. It's a massive undertaking. An entire town with 27 buildings needs to be rebuilt. We are reaching out to all those who love our western heritage and want to help preserve and rebuild the Mescal Movie Set through a donation at GoFundMe.

The filming history of Mescal area dates back over 70 years with scenes from Winchester '73 with Jimmy Stewart, The Big Country with Gregory Peck, and Cimarron with Glenn Ford. The physical set was built as a town in 1968-1969 for Monte Walsh, starring Lee Marvin and Jack Palance. This movie mirrors the current situation with the Mescal Set. An aging cowboy realizes the west he loves will soon be gone, and there is no room for cowboys like him. Released the same year was the Western comedy Dirty Dingus Magee with the legendary Frank Sinatra.

A succession of movies followed, including The Life and Times of Judge Roy Bean starring Paul Newman, The Outlaw Josey Wales with Clint Eastwood, and Tom Horn with Steve McQueen. The 1990s had major big-budget productions. Tombstone starred Kurt Russell, Val Kilmer, Sam Elliott, and many other notables such as Charlton Heston, Harry Carey Jr., and narration by Robert Mitchum. It has become a cult classic and easily the most quoted western of all time. The Quick and the Dead followed with Hollywood "A-Listers" Sharon Stone, Russell Crowe, Gene Hackman, and a very young Leonardo DiCaprio.

Country music fans will recall the 1986 remake of Stagecoach starring the Highwaymen, including Willie Nelson, Waylon Jennings, Johnny Cash, and Kris Kristopherson. The set was also used in The Gambler with Kenny Rodgers.

The Mescal Set was an alternative town set for many episodes of your favorite western TV series, including Bonanza, Gunsmoke, the Magnificent Seven, and Little House on the Prairie. Fans will also remember Mescal as the town of Sweetwater in The Young Riders series. Mescal Movie Set was also a popular site for TV Movies, including The Sacketts, with Tom Selleck, Glenn Ford, and Sam Elliott, Maverick with James Garner, Mel Gibson, and Jodie Foster, and Buffalo Soldiers with Danny Glover.

The future of Mescal is dependent on revitalizing the town into a viable filming location. The set contains 27 buildings, and all of them need major overhauls. Boardwalks and porches need to be replaced, foundations need to be stabilized and rebuilt, roofs need to be replaced, and everything in between needs remodeled. Plans are in place for additional buildings, including a church, blacksmith shop, boot hill cemetery, and other structures. The barn wood is salvaged to be reused, while new wood is used for framing and foundations. Everything from props, wardrobe, and wagons need to be purchased or donated.

In the past, the set was not open to the public, and when not filming, Mescal sat idly in the desert. However, the revitalized movie set will be open to the public, and western enthusiasts can visit and take a tour with a knowledgeable historian. Mescal Movie Set will also be available for special events. However, first and foremost, Mescal will be a film set open to movies, television, documentaries, commercials, music videos, and more.

Also planned for the public is a western movie and heritage museum displaying western artifacts, props, wardrobe items, and other movie memorabilia.

We realize we have set a significant goal. We are rebuilding and expanding an entire town that will include 36 or more buildings and sets. The rebuild is a "Barn Raising" event with volunteers from the community and surrounding states volunteering their sweat, time, and talents to get this old gal back on its feet.

100% of the proceeds from GoFundMe will be used directly to rebuild the set. Tours will be available soon for those who want to follow her restoration.

We invite you to monitor our progress. Regular updates will be provided at https://gofund.me/51965d42 and also other social media outlets. Please visit us at www.MescalMovieSet.com and www.facebook.com/mescalmovieset.

Donate to Preserve and Rebuild the Mescal Movie Set